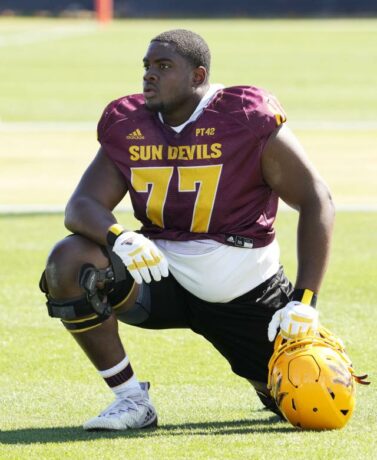 Arizona State offensive guard LaDarius Henderson announced today that he would be spending his final year of eligibility in Ann Arbor.

Henderson was a 6'4", 270 lb. offensive tackle prospect coming out of Waxahachie (TX) Waxahachie in the class of 2019. He was ranked as a 247 Composite 3-star and the #50 offensive tackle, and he picked ASU over offers from Boise State, Colorado State, and Illinois, among others. (Fun fact: While at Waxahachie, Henderson played for former NFL quarterback Jon Kitna, who coached the program for three seasons before stepping down.)

Now listed at 6'5" and 310 lbs., Henderson started thirteen games at left guard in 2021 - in fact, all but 12 of ASU's offensive snaps - but only played in six games in 2022 due to injury. Overall, he has 29 career starts and was named a team captain this past season. He had accepted an invitation to the East-West Shrine Game, but instead it appears he will play for the Wolverines.

Michigan is losing at least two starters after this season in left tackle Ryan Hayes and center Olu Oluwatimi; but there's a good chance that one or both guards, Trevor Keegan and Zak Zinter, enter the NFL Draft in 2023. Henderson was ranked as an offensive tackle coming out of high school and played some as a backup tackle in 2020, but he's more of a guard. My guess is that Michigan plans to bring him in to compete at the guard position.

A possible depth chart for 2023 could be (as the roster stands right now): 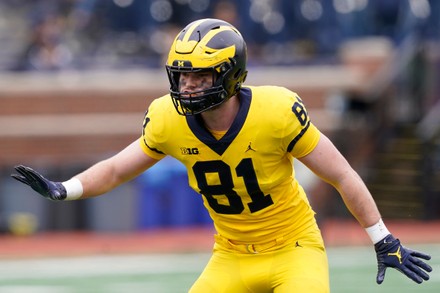 Second-year tight end Louis Hansen announced that he is entering the transfer portal. Hansen played in one game in 2021 and in two games during the 2022 season.

Hansen was a 4-star, the #11 tight end, and #257 in the 247 Composite during the 2021 recruiting cycle, with offers from Florida, Georgia, Ohio State, and Penn State, among others. The Needham (MA) St. Sebastian's product committed to Michigan in April 2020 during the beginning of the COVID outbreak and was a vocal recruiter in the class, so it's a bit surprising in retrospect to see him not stick around.

Here's what I said about him when he committed (LINK):

"Overall, Hansen is a fine prospect. Is he a difference maker at the next level? I don’t believe so. Could he come in to Michigan and maintain the status quo? Sure. He could be Sean McKeon with a little better ball skills."

However, Hansen has also played very little in two seasons, despite having good size and athleticism. He was buried on the depth chart this season even when Erick All and Luke Schoonmaker were hurt; and freshman Colston Loveland and walk-on Max Bredeson both passed him up for playing time. His size (6'5", 245 lbs.) and athleticism do not appear to be the limiting factor, but he never got much practice buzz; I can only assume there were some habits that were just not in line with what the coaching staff sought.

Hansen is the first member of the 2021 recruiting class to depart, though there will surely be others, including this off-season. Jim Harbaugh spoke proudly in the pre-season about keeping that 2021 class together despite concerns about his job and the stability of the program. The class was never going to stay intact forever, but at least all those players lasted two seasons. 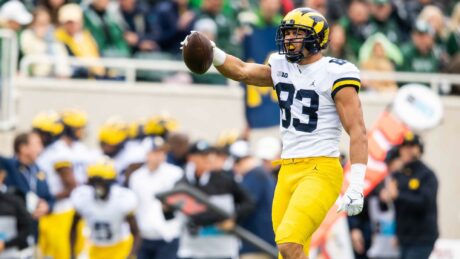 Michigan tight end Erick All announced today that he was moving on from Michigan. The fourth-year player from Fairfield (OH) Fairfield had been a starter at tight end for 12 games and played in 35 overall, but he suffered a back injury earlier this season and missed most of the year while recovering.

I gave All a TTB Rating of 75 when he committed to Michigan (LINK). It's funny that when I went back to read my scouting report on him in his commitment post, I said this:

"He seems to be at his best running crossing routes, which is great, because that’s where Michigan will have its most success with the tight ends."

And the one play that stands out most for him in a Michigan uniform was the game-winning crossing route against Penn State:

Erick All has entered the transfer portal. Couldn’t have done it in 2021 without him pic.twitter.com/uCGKpvxfLn

With All (and Louis Hansen) entering the transfer portal, Luke Schoonmaker making a run at the NFL, and Joel Honigford running out of eligibility, Michigan will go from a very proven tight end room in 2022 to a questionable depth chart in 2023. It's always a strong tight end room at Michigan, but here's the depth chart headed into next season with the player's career reception total alongside:

The odds-on favorite to land All appears to be Iowa, where former Michigan quarterback Cade McNamara is headed. 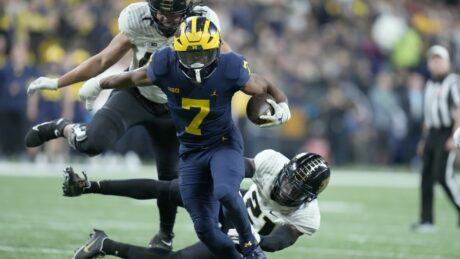 Hail to the Victors! It is truly incredible what this team, these coaches, and these players have accomplished over the past couple years. Michigan is 25-2 in that span. Back in the olden days, a 13-0 record would be good enough to be voted a national champion. Regardless of what happens in the College Football Playoff, this team is a national championship-caliber squad. Furthermore, Jim Harbaugh has cemented himself as one of the best coaches in modern football. If I had to name a top three, it would include Harbaugh, Urban Meyer (ugh), and Nick Saban (ugh again). Harbaugh has taken over struggling program after struggling program and made them elite, from Stanford to the San Francisco 49ers to Michigan. A lot of coaches are in the right place at the right time, including guys like Jimbo Fisher, Gene Chizik, Ed Orgeron, etc. to make once-in-a-lifetime runs and then fall off precipitously. There are very few who can consistently redirect a program wherever they go, and Harbaugh is one of them. 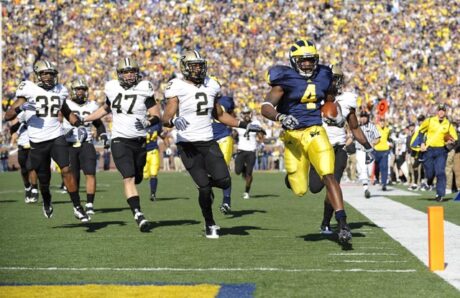 It was fun to walk down memory lane to remember the top games against Ohio State last week, so what the hell? Let's do it for Purdue, too. 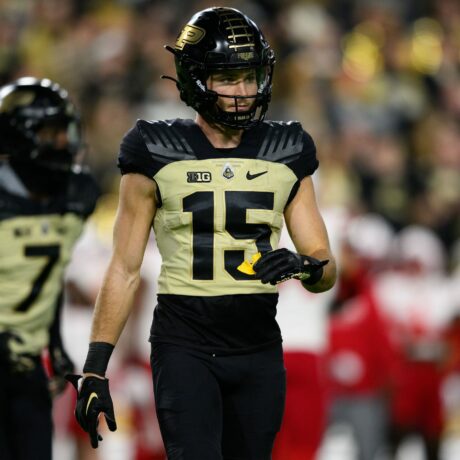 RUSH OFFENSE vs. PURDUE RUSH DEFENSE
Michigan is #5 in rushing offense (244.5 yards/game) and #5 in yards per carry (5.62). Unfortunately, running back Blake Corum - a Heisman candidate - is out for this week and possibly for the rest of the season. That leaves the injured Donovan Edwards, who has a cast on his right hand, as the likely lead back. Can Michigan get heroics out of him for a second week in a row after 22 carries, 216 yards, and 2 touchdowns against Ohio State last week? Otherwise, it's down to freshman C.J. Stokes and walk-on Isaiah Gash. The offensive line has been outstanding and is mostly back to full strength, with all five starters earning some form of all-conference accolades. Purdue is #38 in rushing defense (128.8 yards allowed/game) and #40 in yards allowed per carry (3.91). They had some good performances early in the year, but their run defense seems to have dropped off a little bit in recent weeks. The leading tackler is junior safety Sanoussi Kane (6'0", 205) with 63 stops, but linebacker Jalen Graham (6'3", 220) averages a team-leading 6 tackles per game in his eight contests. Graham and defensive end Kydran Jenkins (6'1", 270) lead the team with 4 tackles behind the line each in the run game. Michigan has leaned on other teams with success in the past, but doing it without Corum is a relatively new and unknown challenge.
Advantage: Michigan 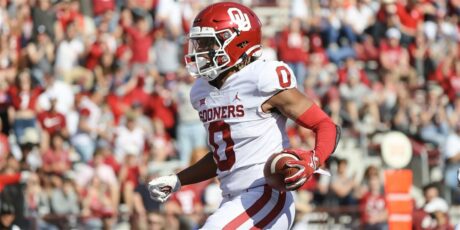 THAT'S why you never give up on the play!

Zach Charbonnet gets the 1st down with a great 2nd effort for @UCLAFootball pic.twitter.com/FMdSJ4XC43

S Sammy Faustin (UMass): Faustin did not record any stats in a 44-7 loss to Army. Faustin made 3 tackles while playing in eleven games this season. UMass (1-11) is not bowl eligible.

OG Chuck Filiaga (Minnesota): Filiaga is a sixth year senior who starts at right guard for the Gophers.

CB Darion Green-Warren (Nevada): Green-Warren did not record any stats in a 27-22 loss to UNLV. He made 5 tackles and 1 pass breakup this season. Nevada (2-10) is not bowl eligible.