Getting to Know -- Chris Rock 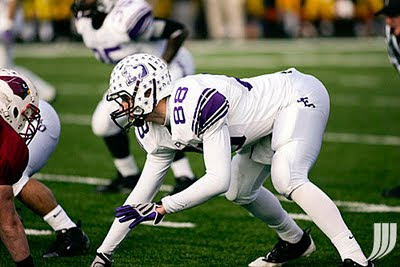 Freshman defensive lineman Chris Rock--not to be confused with the comedian Chris Rock--recently moved from Columbus to Ann Arbor to join forces with the good guys. Hail to the Victors. But as awesome as that is, the fact remains that most people think of the comedian when they hear the name Chris Rock. So against my better journalistic judgment, I began the interview with Chris by asking him what it's like to share his name with a megastar, and he was kind enough to humor me.

"Well, my parents wanted to name me Christopher, and when they named me that, Chris Rock wasn't famous yet or anything. And when I was growing up, I didn't like the name Christopher, so everyone called me Chris. And then Chris Rock became famous. So now not a day goes by that someone doesn't say, 'Oh, your name's Chris Rock!'"

Okay, since that's now out of the way, we can return to the real story, which includes Chris becoming a Michigan Wolverine despite being raised deep inside enemy territory. And as you might expect, the decision to come to Ann Arbor was met with some resistance.

"I hear so much every day, like 'You're going to Michigan! Why?' They just love talking crap to me. One time they actually wrapped up my stuff, like all my Michigan gear, and wrote [on it], 'Go Bucks!' So I use that sort of stuff for motivation."

In September, Chris will be channeling that motivation for the Wolverines as he runs out of the Big House tunnel and touches the banner. But it wasn't too long ago that even he was on the other side of the most bitter rivalry in college football.

"Um, it's hard to say this, but I grew up an Ohio State fan. I used to love Ohio State; I loved Ohio State right up until my freshman year, until I started to be recruited. I guess you take a different mindset when you're thinking about which colleges to go to."

Chris even rooted on the Scarlet and Gray during a visit to Ann Arbor in seventh grade. But now sold on the Maize and Blue, Rock joins his new Michigan teammates, one of whom is Patrick Omameh, who hails from Chris' same Ohio powerhouse football program: St. Francis DeSales. Obviously, Omameh is an established force on the offensive line at Michigan, and it sounds like Rock is looking to make a similar impact on the defensive line.

"My mindset is I'm going to do whatever I can to play [during the 2011 season]. I know I'm not guaranteed anything, so I'm trying to work my butt off and see what happens."

Strongside defensive end is the position for which Chris was recruited; however, many Michigan fans--including myself--look at the depth chart and believe that a player or two slotted for that position could/should move to defensive tackle. For his part, Chris is open to the idea, and he's quickly putting on muscle mass. At 6'5'' tall, Chris now weighs in at 270 lbs., an even 20 lbs. more than his previously reported weight. Don't be surprised to see him add an extra 10 -15 lbs in the upcoming years to provide flexibility and utility along the defensive line.
Let's hope that when Michigan fans hear the name "Chris Rock" five years from now, they think of the football player rather than the comedian. This kid from Columbus is about to make a name for himself -- in Ann Arbor.
Posted by TTB Andrew at 7:00 AM