BBQ at the Big House visitors

The following is at least a partial list of recruits who are supposed to visit Ann Arbor for this weekend's BBQ at the Big House:

* Denotes a player who has not been offered by Michigan.
Posted by Thunder at 3:42 PM No comments: Links to this post

Email ThisBlogThis!Share to TwitterShare to FacebookShare to Pinterest
Labels: BBQ at the Big House

The title of this post is a lie. It's from a TheWolverine.com article that's basically an ad for Michigan's football camps.

The content of the article states that players who sign up for the camp will be given position-specific instruction, as well as tips on running form, weightlifting, and nutrition. That information might be true, but if you are a kid who's looking to get better at football - or a parent of a football player - Michigan's football camp is probably not the best camp to make improvements.

Most BCS schools use "camps" as institutional scouting combines. The best athletes will be given the most attention, while decent high school athletes will be passed over and nudged aside. Which is fine. Schools have to do these things to identify prospects and refine the recruiting process. And despite the lack of instruction, some kids want to go anyway. They want a chance to mingle with the coaches and other top prospects, to get a glimpse at the facilities, to see what big-time football is like. Which is fine.

I've never been to Michigan's camp, but players I've associated with have gone. I've heard it's a meat market, but I don't know firsthand. Michigan's camp might be different than other BCS schools, but if you really desire individual attention and knowledge about football, go to a D-II or a D-III school. Those coaches are there to teach football.

Don't get caught up in the hype.
Posted by Thunder at 11:10 PM No comments: Links to this post 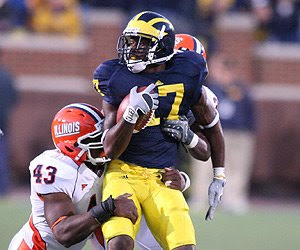 This is a few days old, but former Michigan wide receiver Toney Clemons has decided to continue his college football career in Boulder as a Colorado Buffalo.
Clemons was recruited by Lloyd Carr and played one season under that regime before Rich Rodriguez was hired. He made an ill-suited position switch to slot receiver and caught only 11 passes for 101 yards this past season.
Yet new Colorado offensive coordinatorEric Kiesau, who coached previously at Cal-Berkeley, said this:

"'He said he feels I can come in there and be at Colorado what [DeSean] Jackson was
at Cal,' Clemons said."

Uhhh . . . right. Jackson had 601 and 1,060 and 762 yards receiving in his three years as a Golden Bear. And he was a first round pick. Clemons' biggest achievement has been earning high rankings (such as #91 overall on Rivals in 2007) coming out of high school. This is an example of the type of B.S. that college coaches feed players in order to lure them to a school. Clemons might be a successful receiver, but DeSean Jackson he is not.

Clemons said nice things, especially about Carr and his staff, on the way out. Michigan fans should harbor no ill will toward him. I wish him good luck . . . unless we schedule a non-conference game against Colorado . . . and we're down 26-21 in the waning seconds of a game at dusk . . .

Posted by Thunder at 9:53 PM No comments: Links to this post 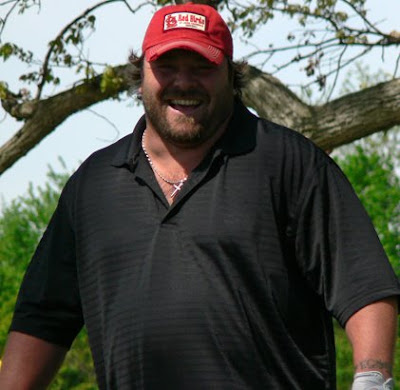 This past weekend, the Michigan Wolverines celebrated their 130th year of football with a reunion. That event also coincided with the Brian Griese-Steve Hutchinson "Champions for Children's Hearts" golf tournament, which raised $650,000 for Mott Children's Hospital.
Former players in attendance were Griese, Hutchinson, Jake Long, Mike Hart, Adam Kraus, Chad Henne, Charles Woodson, Elvis Grbac, Steve Everitt, Glen Steele, Corwin Brown, Marcus Ray, Ronald Bellamy, Anthony Thomas, Tyrone Wheatley, and Jon Runyan, among others.
The most interesting one to me was Glen Steele, whose picture you can see above. Steele finished his Michigan career second on the career sacks list (24) with 45 overall tackles for loss. He then spent several years with the Cincinnati Bengals before retiring. I guess this is what happens when linemen retire; their metabolism slows down and they begin to look like bounty hunters.
(Image via Rivals.com)
Posted by Thunder at 3:49 PM No comments: Links to this post

This past Saturday, an article popped up from the Ann Arbor News about Tyrone Wheatley.

Wheatley was contacted last December by former Michigan defensive coordinator and current Eastern Michigan head coach Ron English. English needed a running backs coach and Tyrone Wheatley was really really good at something having to do with football, but I can't remember what . . .

Wheatley played for Michigan from 1991 to 1994 and racked up 4,187 rushing yards and 47 touchdowns. His best season was his sophomore year, when he averaged 7.3 yards per carry and scored 13 touchdowns. He wrapped up his college career as Michigan's second-leading rusher and with the second-highest yards per carry average (6.1).

Picked 17th by the New York Giants in 1995, Wheatley appeared to be the heir apparent to Pro Bowler Rodney Hampton.

Wheatley shuffled off to Oakland after the 1998 season, where he spent six years learning how not to run a football team from Al Davis. He ended his career after the 2004 season with 4,962 rushing yards and 47 rushing and receiving touchdowns. Hey, those numbers look kind of familiar . . .

Anyway, Wheatley spent one season as the head coach of his alma mater at Dearborn Heights Robichaud, where he went undefeated (thanks, Al Davis!). Then he spent one season coaching and getting educated at Ohio Northern. Now he's an FBS assistant coach with head coaching aspirations.

Wheatley was one of my favorite players growing up. He was fast and strong and I thought he got a raw deal in New York. But then again, at that point in my intellectual development, I thought every Michigan player was destined for the NFL Hall of Fame and a presidential nomination. I remember being sad when he graduated and even though several good running backs have passed through Ann Arbor in the past 15 years, there hasn't been one quite like Wheatley.

(I'm not saying they're equal players, but I'll be damned if those Wheatley highlights didn't remind me of Brandon Minor. The violent-but-upright running style, the size, and the stride all look similar.)
Posted by Thunder at 6:54 PM No comments: Links to this post

Email ThisBlogThis!Share to TwitterShare to FacebookShare to Pinterest
Labels: Remember Me?, Tyrone Wheatley

Is the Rodriguez offense evolving? 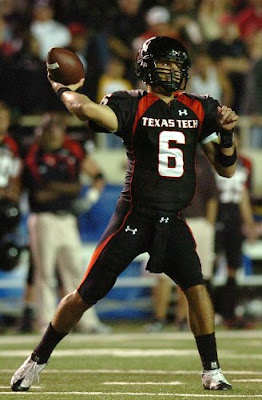 Michigan message boards have been roaring lately about the commitment of Drew Dileo, a lightly recruited slot receiver from Louisiana. Nine months before signing day 2010, Michigan fans are wondering why Rich Rodriguez would offer - let alone accept a commitment from - a player whose next best offers come from Stanford and Northwestern. Fellow Michigan commits Antonio Kinard and Tony Drake still don't have any FBS offers besides Michigan.
Watching these message boards flutter with activity about Dileo, I began to wonder what Rodriguez might have in store for Michigan's offense. My mind took a not-so-huge intellectual leap from Rodriguez's spread offense to those of his good friend Urban Meyer at Florida and Mike Leach at Texas Tech.
Looking at Meyer's roster for 2009, I made an interesting (to me) discovery:
Going into the 2009 season, Florida has only two scholarship running backs (Chris Rainey and Emmanuel Moody) on the roster. Fellow "backfield mates" Jeff Demps and Brandon James are both listed as "athletes" on their official roster, and both are 5'8" or smaller and about 185 lbs. The class of 2009 adds only Mike Gillislee to the running back stable, which means a total of three designated running backs. Meanwhile, Florida has nine scholarship receivers and one incoming (Andre Debose) to give them a total of 10 receivers.
In 2008, Florida threw the ball 329 times (37.7%) and ran the ball 545 times (62.3%).
Meanwhile, Texas Tech has 15 returning scholarship receivers and four freshmen joining the team in 2009 to give them a total of 19 receivers. They threw the ball 465 times (59.5%) and ran the ball 317 times (40.5%).
Both are spread offenses, but they're vastly different.
Michigan currently has eight receivers. Two will graduate after this season, but four are incoming this year and six more will arive in 2010. Hypothetically, this gives Michigan a total of 16 scholarship receivers for three spots on the field in 2010 (assuming no position changes, for sanity's sake):
Cameron Gordon, Je'ron Stokes, Jeremy Gallon, Teric Jones, Drew Dileo, Jeremy Jackson, Ricardo Miller, Jerald Robinson, D.J. Williamson, Tony Drake, Junior Hemingway, Martavious Odoms, Terrance Robinson, Roy Roundtree, James Rogers, Darryl Stonum
With the entrance of Tate Forcier to the fold (a polished passer with a slight build), I think it's safe to say that Rodriguez's offense might be evolving into a pass-first spread. I sincerely doubt it will turn into Texas Tech and their standard of four- and five-wide sets, but I think it's clear that he's trying to develop the depth at the wide receiver position to throw the ball at will. Not only does a bloated number of receivers increase the chances of finding impact players at the position, but it allows the coaches to rotate players in and keep them fresh for running downfield and blocking. I would not be surprised to see more sets with four wide receivers in the next two or three years, but I think three will remain the norm.
I'm excited to see what the Michigan offense will look like in the next couple years. I'm fairly certain that Michigan's offense will not replicate that of West Virginia circa 2005-2008. Forcier and, arguably, 2010 recruit Devin Gardner are better passers than Pat White was coming out of high school. Therefore, It would seem counterintuitive for Rodriguez to bring in an accurate, polished quarterback and 16 receivers to run the ball 60% of the time like Meyer is doing in Florida. Once Rodriguez gets his offense going at Michigan, I would expect that the Wolverines will be throwing the ball 50 to 55% of the time.
Posted by Thunder at 7:16 PM 19 comments: Links to this post