Getting to Know -- Desmond Morgan 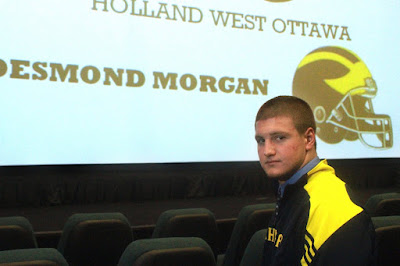 Desmond Morgan had his sights set on Michigan during the recruiting process. Originally committing under the Rodriguez regime, Desmond remained firm in his pledge to the university from the beginning to the end of the coaching change. "I committed to the school, not just the coaching staff," he stated. And although Morgan is currently undecided about his college major, he is a 4.0 student who should fit in nicely with his chosen school's academia.
Desmond grew up in Holland, Michigan, which is located on the far west side of the state. Taking advantage of his surroundings, Morgan often enjoyed going to the beach with friends and listening to music while playing a pick-up game. Rap/Hip-Hop is his preferred style of music, and although I don't listen to a lot of that genre, I do have the internet, so I know what it's about.
When I caught up with Desmond, he was preparing for the 2011 Michigan High School Football East West All Star Game and also getting interviewed by people other than me. He performed well in the contest, tallying six tackles. But it's clear that Desmond isn't complacent about his football capabilities:

"What are my greatest weaknesses? I'll be honest; I have quite a few of them. I'd say my biggest one would be my pass coverage and recognizing when two receivers are crossing, which one is the biggest threat, and [recognizing] which DB needs the most help picking up a guy coming across, things like that. So I'm working on that, getting depth and recognizing the different routes and being able to get underneath, making a play on the ball. In high school, we didn't have to do that as much, especially with all of the man coverage that we ran. And with line backing, I'd say we were usually more focused on the run. So the biggest thing I'm working on is helping my pass coverage game out."

With his intelligence, work ethic and willingness to look in the mirror, Desmond sounds like a coach's dream. It's just not yet completely clear which coaches will get the opportunity to work with Morgan. Although Desmond was definitely recruited as a linebacker, it has been speculated on this blog that Morgan's skill set could lead to playing time at another position, such as fullback or upback. We are not alone: Desmond and his dad see that as a possibility too.

"Most of the talks [with the coaching staff] have been playing linebacker. To be honest, I don't even know which position, as far as one of the linebackers, it will be. But my junior year I played fullback as well; I actually started at fullback. So I kind of understand the fullback position a little bit. But I'm open to anything. At this point, the way I look at it - any position that they need me to play that will allow me to help the team and see the field, I'll do....My dad had read some of the online stuff, and I think that planted the idea in his mind too, and he said, 'What do you think about fullback?' And I was like, 'What do you mean?' And he said, 'With the new staff, they might be looking for fullbacks - would you be open to that?' And I said, 'Yeah, sure, whatever it takes to get on the field, I'll do it.'"

During Desmond's senior year, he didn't see much/any time at fullback because he was too busy playing quarterback. Yep, if you didn't already know, he played middle linebacker and quarterback. That's quite the unusual pairing, but as unusual as it may be, Thunder often writes that playing QB in HS contributes to a player's overall development and understanding of the game. So I asked Morgan about it.

"I grew to understand offenses a lot better. It helped me to see my keys on the other side of the ball, recognize pass coverages, see pre-snap stuff...but first and foremost I think it's leadership. Before my junior year I played middle linebacker and was the captain of the defense, I guess, and I understood the leadership role...but I definitely gained a whole new respect for leadership by playing quarterback because I didn't realize how close the two positions were in regards to leading their sides of the ball. And playing both of them helped me grow into more of a team leader."

Although Desmond's days as a QB are almost certainly finished, he should be able to peruse through the offensive playbook at his convenience since he's rooming with 2011 QB Russell Bellomy. Here's to Morgan's success in the winged helmet -- be it at linebacker, upback, fullback, quarterback or slot receiver.
Posted by TTB Andrew at 7:00 AM