An Interview with Erik Magnuson


When I tried contacting freshman offensive lineman Erik Magnuson about doing a second Touch the Banner  interview, it turned out that he was preoccupied with something else at that exact moment: 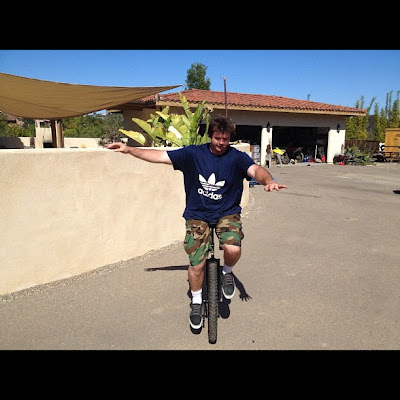 Erik calls it "the best gift I've ever been given."  And considering Taylor Lewan's notorious affection for his tandem bike, there is only one logical conclusion: "Left tackles abhor normal bicycles."


Fun, games, and unicycles aside, Erik continues to work hard toward making an impact on Michigan's offensive line.  He was recently nice enough to hop off of his unicycle to give us an update on his status and thoughts on Michigan football.

Choosing Michigan:  "Well, it's pretty simple.  It was coach Hoke.  I wouldn't have much interest in Michigan if it weren't for Coach Hoke going there from San Diego State.  So I had a relationship with him and I was pretty close with him.  He started recruiting me early my sophomore year, and I had a good relationship with him all that year, and then he moved, and then I called and said, 'Get me on board.  I want to play for you.'"

Roommate:  "I'm going to be rooming with Kyle Kalis. . . .a lot of personality in one room."

Playing as a freshman:  "I want to play.  I'm going to get there and work my butt off.  I'll be working out, but I'll also be studying.  I'll learn from the players, watch as much film as I can, learn as much as I can as fast as I can because I don't want to sit out.  I want to make an impact right away. . . . Coach has told me I'll have a chance to do it, so that's what I'm trying to do."

Passion and heart, being well-rounded:  "I think one of the things that gives me an advantage over other people is how much passion and heart I play with.  I take this very seriously because it's what I love to do.  I think a lot of players don't have that like I have.  Physically, I think I'm a good pass blocker; I'm a pretty good run blocker - I'm pretty well-rounded.  But hopefully I can get better at keeping low and that type of thing.  In run blocking I need to stay lower, and that type of thing I'm going to work on."

The next great left tackle:  "Some people have told me that I'm going to play left tackle, but obviously I'm young to play left tackle since Taylor's there right now.  I'm open to playing anything on the offensive line; I don't care if I have to play center, right tackle, anything.  Eventually I'll end up playing left tackle. . . . As far as anything he [Coach Funk] has ever said to me is that I could project to right tackle so I can play early, but eventually he wants me playing left tackle.  That's what they recruited me as, and that's what they want me to play."

NFL, the next goal:  "College is another step in getting to my goal.  When I was in high school my goal was to make varsity, after varsity my goal was to get a division one scholarship, and now that I've done that my big goal is to make it to the NFL.  That's one of the reasons why I picked Michigan - I think they give me a good opportunity to do that."

Sticking with the unicycle:  "I don't know about that [riding Lewan's tandem bike].  I'm more of a unicycle guy. I like my unicycle."
Posted by TTB Andrew at 7:00 AM