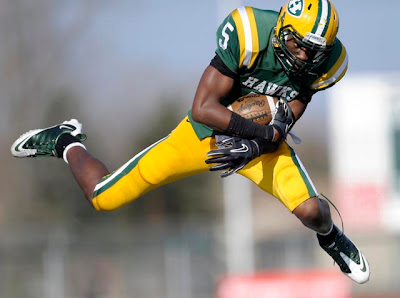 Farmington Hills Harrison tight end Devin Funchess broke tradition last April when he committed to Michigan over Michigan State. Despite MSU's strong ties to his school, Funchess inked his letter of intent for Michigan and immediately began injecting a bit of blue into the Farmington Hills Harrison (FHH) program. Although Devin's been busy "talking to the young kids" about Michigan while training hard for the upcoming season, he took some time out of his Tuesday afternoon last week to give TTB readers an update and answer several questions.
FHH - Cass Tech rivalry: "That was a great game to be a part of because of all the high-talent players. . . . That game pretty much decided our whole season to me. I figured that we were going to win it all - because the level of players that were on the Cass Tech team was better than the rest in the state of Michigan."
On not committing to Michigan State: "There are a bunch of high-level athletes [out of FHH] who have gone to Michigan State. They are a big time player for our high school athletes. . . . When we [Devin and Mario Ojemudia] committed to Michigan, a bunch of their fans were going all crazy, asking us what was wrong, calling us names and all that."
Height and Weight: "I'm 6'4'' and a half/6'5'' and about 223 [pounds]. . . . The coaches want me to come in at around 225/230. They tell me I'll eventually get to about 240/245."
Blocking: "That was always one of the weaker parts of my game, but I got better at it this year because my high school line coach taught me a different technique I can use on defensive linemen."
Route running and splitting out: "I've run pretty much all of the routes that receivers usually run. . . . On the weekends I go to a camp to work on my footwork and routes. It's run by Reggie Wynns and Chris Archie. . . .The coaches told me that in the red zone, I'll get split out more for more jump ball type plays or play as a U-back. . . . It's a tight end off the line that's lined up in the backfield or spread out in the slot. I'd be behind the line of scrimmage and on pass plays, I'd start on the left and run over to the right and be the first option in the flat. And then when I move over to the slot, I can get motion when I line up there, and I'd usually be guarded by a slower linebacker. . . ."
Playing next season: "The coaches want me to play right away because they lack pass-catching tight ends, so they told me to come in and get ready to play. . . . It's probably about an 85% chance I step on the field this year, first game."
A mini-celebrity: "My life has changed drastically. I used to be able to go to the mall or wherever without anybody knowing me. But [now] a couple people always will come up to me. And when I was on spring break [in Panama City, FL] a couple people came up to me because they recognized my face. It was kind of weird."
Posted by TTB Andrew at 7:00 AM