Getting to Know -- Chris Barnett 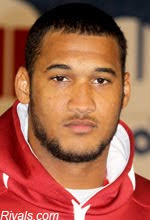 New TE arrival Chris Barnett thinks it's great to be a Michigan Wolverine. After previously committing to both Oklahoma and Arkansas, Chris couldn't be happier with his final decision to don the winged helmet. "From visiting with Chris and talking with him about it, he loved everything about his visit to Michigan," states Barnett's high school coach Mark Smith. Likewise, Michigan should be pleased with what Chris brings to the table, Coach explains.

"A couple things come to mind when I think of Chris and the way that he plays: #1 is that he's versatile, and #2 is that he's explosive. We used Chris in a variety of different ways. We used him in the traditional tight end position; we also used him in the backfield as the fullback, motioning him around a little bit. And we also split him out wide, going three by one, putting him out there by himself -- matching him up against a corner and using his length, his athleticism and his physicality to our advantage."

Chris' athletic ability may have allowed him to wear many offensive hats against high school competition; however, most observers expect Barnett to play a typical TE role at Michigan. So Coach Smith speaks to that as well.

"Blocking was critical for us and when he got his hands on you, then you were going the other direction. But what I liked about him was how physical he was. And I think Michigan is going to get a really physical, mature player -- right away"

So I'd imagine that it's cool to be Chris Barnett right now. He's about to receive a free world-class education while showcasing his athletic abilities in front of 110,000 people every Saturday. But while Chris thanks god for his talents and is a "family man," circumstances for him haven't always been so positive.

"Growing up, it was always a back and forth situation between my mom's and my dad's. I never had a secure place to be; I never really knew who wanted me and who didn't...I mean, we've been homeless and I was sleeping on a washing machine and dryer. I had to take my jeans off and wrap my shoes up in my jeans and use it as a pillow. So life's been a struggle. And that's where football came into it...."

Despite these hardships, Barnett has developed good relationships with many members of his sizable family, several of whom are also athletes. His brother, Eryon Barnett, plays CB for the Texas Longhorns, and a close cousin plays FCS ball. No stranger to adversity, however, Barnett experienced an injury on the football field at the beginning of his senior year.

"I tore my ACL in early October, and I didn't have surgery for it until December, because like I said, me and my mom, we struggle. We don't have a whole bunch of money. So the injury thing wasn't to the point where I could go get surgery. But I've been working out really hard...I came up on the spring game, and I was 295 [lbs]. Right now, I'm 272. Coach wants me to be 280 -- no [not any] more than 280. But at the same time, I'm getting stronger. I'm crisp [while] running. My knee that I had surgery on still isn't 100%, so I go about 80/85%. But talking to Coach, I still have 2 months [before the season starts] to rehab with them. I don't know, but I'm trying. But if I'm not ready and Coach doesn't let me play and I got to redshirt, then I got to redshirt. It is what it is. And if it is, well, then I feel sorry for whoever we play next year."

With a host of mitigating factors, it's difficult to predict whether or not Chris will see the field his freshman year. But it doesn't appear that his HS coach would be surprised to see Barnett on the field in 2011.

"Chris understands that he has to go in and earn a position there and find a hole that he can fit into and he can play. I know when Coach Hoke and the staff were here [in Texas], they expressed that they didn't have many tight ends on the roster. At that spot in particular, they were going to have to have some freshman contribute. I know Chris and the way that he works and his habits on the field are going to put him in a position to contribute right away...."

Early PT or not, it sounds like Chris is doing his best to help "lay the foundation" for Michigan's future. Not only is Barnett keeping in shape and preparing for the season, but he is also creating a winning mindset.

"We [Chris Bryant, Frank Clark, Justice Hayes] have been talking constantly, like every day, about the things that we're trying to accomplish. And I told everybody, 'this is the coaches' first year; we're the freshman recruiting class; we're the first people to come in with them...so it's really our job to lay down a foundation."

Chris was so excited to start laying the foundation that he caught a plane to SE Michigan early in the morning on Friday June 24th. Presumably, Barnett then unpacked his bags, said "what's up?" to his new roommate Chris Bryant and began breaking ground.
Posted by TTB Andrew at 7:00 AM