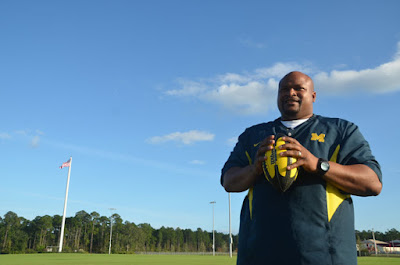 Hailing from Saginaw, Sam Sword joined Michigan as an inside linebacker in 1994, became a starter in 1995, and then "never looked back." Sword graduated as a national champion and the 3rd leading tackler in Michigan history (265), a distinction he still holds. His college statistics included those 265 tackles, 24 tackles for loss, 5 sacks, 5 pass breakups, 3 forced fumbles, 3 fumble recoveries, and 1 interception.  Sword later spent four years in the NFL with the Raiders and Colts and now resides in Palm Coast, Florida, while teaching kids life lessons through his emerging youth football and conditioning programs. He recently took time to give us an update and answer a few questions posed by TTB readers.

On youth programs: "I want to give them some of the training that I had at Michigan, like the winter conditioning-type drills. I want to talk to them about mental toughness to help prepare them. We always said at Michigan that it's 90% mental and 10% physical, so if you can get over that mental hump, you can do anything you want to do. And that doesn't just apply to athletics; that's in life. We're also going to talk to them about finances, and the ACT, the SAT to get them prepared for college and just see where it goes...hopefully it's the start of something good."

On being a Michigan Man: "Looking back, my decision to go to the University of Michigan was just the best decision that I've made in my life. Michigan took me from an immature kid, and then all the lessons that Lloyd and the coaches taught me and learning from my teammates - it taught me how to be a man, a man of integrity. That means doing things the right way even when people are not watching, and being accountable to your teammates and your family. It was just special...I want my kids to get that education. I tell my son, it's about the knowledge that you're going to gain; we want him to go to Michigan."

On keeping tabs on Michigan Football: "I always watch. Man...the guys that are going to be graduating this year went through all sorts of adversity; adversity builds character, and what a way to go out. And now Michigan's back on track, back to where we should be."

On keeping up with former players: "...I talk to a lot of the guys, Larry Foote, Marcus Ray, Chris Singletary, who's still there; I talk to Lloyd. I got a chance to see Lloyd a couple months ago. He was in Daytona at a quarterback club, so I got to spend some time with him. We're always family. Even if we don't keep in touch as much as we should, when we see each other, it's all love and that's what it's all about."

On difference between relationships in college and the NFL: "In the NFL, it's more of a business, and players have families and kids, so the comradery isn't the same, but some of the guys I still keep in contact with, but not as many as my college days. There is no experience like college..."

On having the "best name for a Michigan linebacker, ever:" "(Laughs) There are a lot of great names at the University of Michigan. If that's how your readers feel, then it's an honor."
Posted by TTB Andrew at 7:00 AM