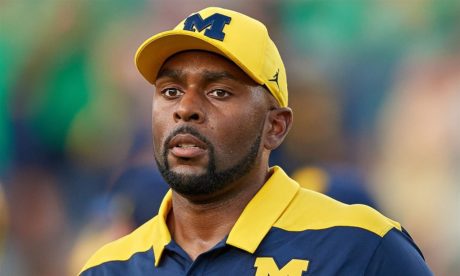 Following a 2-4 season and five straight losses to Ohio State - plus an embarrassing loss to Michigan State in 2020 - questions about Jim Harbaugh's status as head coach have been non-stop. I have a hard time calling for coaches' jobs, because as a (lower level) coach myself, I know some of the struggles with coaching.

Of course, college coaches have a different situation than high school coaches, because they have more power and more control over which coaches and players enter their program. But there are similarities in that your team's success is subject to injuries, off-the-field behavior of young people, administrative limits, etc.

So here I would like to address which coaches I would prioritize bringing back, from highest priority to lowest:

Sherrone Moore (Tight Ends): Moore is Michigan's top recruiter, especially in-state. According to 247 Sports, he's the #6 recruiter in the country and #2 in the Big Ten (behind Ohio State's Brian Hartline). I have not been extremely impressed with the performance of Michigan's tight ends over the past couple seasons, but I think that's more of an issue with the structure of the offense than the individual players. Regardless, tight end is a position where you can hide a mediocre X's and O's/technique coach if the guy coaching them can recruit his butt off. And Moore can. He's listed as the primary recruiter for QB J.J. McCarthy, OT Giovanni El-Hadi, C Raheem Anderson II, TE Louis Hansen, LB Tyler McLaurin, and WR Andrel Anthony, and he's the secondary recruiter for RB Donovan Edwards.

Ed Warinner (Offensive Line Coach): Warinner is not necessarily a standout recruiter, though he has been better than I think some expected when he was hired (#42 in the Big Ten in 2021). However, he has been a very good developer of talent, getting four offensive linemen drafted in the 2020 NFL Draft. That's the first time since 1944 that Michigan had four linemen drafted, and it took 29 rounds for the fourth one that year (you all remember Bob Derleth's run with the Detroit Lions, right?). The 2020 season was not a good one for the offensive line, but Michigan replaced those four starters, had its top two tackles get hurt early, and had its center get hurt late in the year. It was a messy, fluky season.

Jay Harbaugh (Running Backs Coach): A lot of people think Jay Harbaugh only got his job because he's the son of Jim Harbaugh. And they're almost certainly correct. But being hired for the wrong reason doesn't mean he's bad at his job. Harbaugh is the #13 recruiter in the Big Ten, and he's been responsible for getting elite running backs in three straight cycles: Zach Charbonnet, Blake Corum, and Donovan Edwards. Like many, I have been frustrated with the constant rotation at running back, but that's certainly not his decision. The head coach and offensive coordinator make those kinds of decisions. Furthermore, we've seen players develop under him, including Karan Higdon and Hassan Haskins.

Mike Zordich (Cornerbacks Coach): Zordich has proven time and time again to be an excellent developer of talent. He takes guys with perhaps limited physical talent and turns them into standout performers. The 2020 season was a fluke when Michigan's defensive backfield got torched early in the year, but that was not the case as the year went on. Despite playing only six games, first-year starter Gemon Green is #2 in the conference with 9 pass breakups. Granted, some of that comes from being targeted a lot after his early struggles, but he still held up. Meanwhile, Vincent Gray on the other side went from being a huge liability to somewhat invisible later in the year. I wish Zordich were a better recruiter, but if he can get some help there from Jay Harbaugh or Sherrone Moore to bring in big-time talent, Michigan should be in business.

Jim Harbaugh (Head Coach): Okay, I realize very little of this matters if Harbaugh is gone, because a new head coach would likely clean house except for one or two guys. But performance-wise, I'm more confident in the abilities of the above coaches. I could write pages and pages about Harbaugh, but I do think his track record shows that he is a good coach. He works hard, he has a lot of pride in the program, he has shown flexibility, and he's a positive ambassador for college athletes, championing things like satellite camps, overseas trips, one-time transfer rules, and the Black Lives Matter movement. I'm not saying everybody loves him, but all those things improve the lives of the student-athlete. It's a head-scratcher to me that he has garnered so much negativity in the media. I know a lot of people are itching to offer Iowa State's Matt Campbell the Michigan job, but there's a Matt Campbell every year, whether it's Luke Fickell or whoever's coaching Boise State or Jeff Brohm or some up-and-coming coordinator. For better or worse, there's only one Jim Harbaugh - a guy with NFL connections, a proven track record of success, and connections to the university.

Josh Gattis (Offensive Coordinator/Wide Receivers Coach): In Gattis's two years at Michigan, he has shown flashes of being able to call explosive games . . . and flashes of appearing not to know what the hell he's doing. The first few games of 2019 and four out of six games in 2020 were pretty awful. I do think Gattis looked worse in 2020 for reasons somewhat outside of his control (Nico Collins opting out, injuries on the offensive line), but there were still a number of inexplicable decisions, such as sticking with Joe Milton over Dylan McCaffrey/Cade McNamara, not using more tempo, not running more check-with-me looks, not using the QB in the run game, etc. That being said, Gattis is a good recruiter and has gathered a ton of talent on the offensive side of the ball, so you run the risk of scattering a bunch of talented players if you send him packing. People have accused Jim Harbaugh of meddling with Gattis's offense, and I don't know if that's the case or not. The truth is that maybe Harbaugh should meddle, because the offensive game plans seemed more consistent and coherent when Harbaugh was more involved back in 2015 and 2016.

Brian Jean-Mary (Linebackers Coach): Jean-Mary is known as a very good recruiter with ties to Florida and Texas. Having sat down with him in a Zoom clinic during the pandemic, I have to say that I was not very impressed with his personality or his teaching. Don't hear what I'm not saying: I didn't dislike Jean-Mary, but I just felt the clinic and interaction was so-so. Maybe he was just getting his feet under him early in his Michigan tenure, and maybe he was having a bad day. Clearly, Jaydon Hood and Junior Colson liked him well enough to commit, so there's that. Overall, I think Jean-Mary is a good recruiter and the jury is out on him as a coach, so do with that what you will.

Don Brown (Defensive Coordinator): Brown is an excellent football coach, period. There's no denying that. He was good at UConn, UMass, Boston College, and Michigan. But sometimes things just fall apart. Maybe it's recruiting. Maybe other coaches just figure you out. Maybe there's tension on the football staff for some reason. Whatever the reason, it seems like Brown has sort of hit a wall at Michigan. This season his biggest downfall was not adjusting quickly enough, especially to Michigan State's offensive gameplan. In the past couple years, he has not figured out a way to slow down Ohio State's offense. There are extenuating factors (injuries to defensive linemen, Ambry Thomas opting out, etc.), but clearly there needs to be a shakeup on the staff somewhere. Jim Harbaugh doesn't need to clean house altogether, but a fresh outlook would be helpful and it might start with Brown.

Bob Shoop (Safeties Coach): There are a lot of rumors with Shoop, but what we know is that he was basically not coaching the safeties this year. He was contributing to the program remotely. There's an old saying that "Your best ability is your availability." It seems like Shoop did not have the ability to be available, so I don't have a whole lot of trust in that changing.

Shaun Nua (Defensive Line Coach): I like Shaun Nua. I think players like him, and so do recruits. But on the recruiting and production fronts, he hasn't done much. I see more potential there on the recruiting side than the player development side. I said above that I think you can hide a good recruiter who's not a great coach, but you can't hide him at the defensive line spot. Defensive line is the most important position group on that side of the ball, and it seems like Michigan took a gamble here with an unproven coach that hasn't really paid off. It's not all bad, because I did see technical improvements from Kwity Paye between 2019 and 2020. But especially at the defensive tackle position, the players just aren't coming along quickly enough.

Ben McDaniels (Quarterbacks Coach): It's hard to separate the faults of the quarterbacks coach from the faults of the offensive coordinator, but the quarterbacks are not performing up to par. Joe Milton is #10 in the conference in completion percentage, #7 in passer rating, and #4 in yards per attempt. He's one of just five quarterbacks without more touchdowns than interceptions, along with MSU's Rocky Lombardi (8 TD, 9 INT), Maryland's Taulia Tagovailoa (7 TD, 7 INT), MSU's Payton Thorne (3 TD, 3 INT), and Nebraska's Luke McCaffrey (1 TD, 6 INT). That's not the company you want to keep. Last year Shea Patterson's completion percentage dropped over eight points from 2018 (64.6% to 56.2%). This is two straight seasons where McDaniels's starting quarterback has a lower completion percentage than 57%. Whether that's the fault of Gattis or McDaniels, that's . . . not good. The last time Michigan had two consecutive years of sub-57% completions from its starting QB was 2011 and 2012, when Denard Robinson played his way into being an NFL running back.