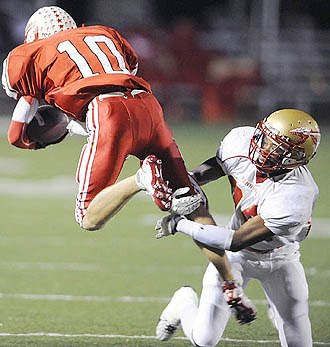 Stop reaching!
Cullen Christian, a highly rated cornerback from Pittsburgh, committed to Michigan on Tuesday night. He had long been considered a Michigan lean, although he was supposedly announcing his choice between Michigan and West Virginia. It turns out that during his press conference, he admitted that he had been a silent Michigan commit since May.
Christian is the #6 or the #3 cornerback in the country, depending on whether you prefer Rivals or Scout. Many observers also think Christian could play safety, and I used to be one of those. Christian did play free safety for Penn Hills High School this year, but that was largely because teams could throw away from him if he was on one side as a cornerback. Free safety allows your best athlete to have an impact all over the field.
But the more I've watched of Christian, the more I feel his attributes are better suited for corner. He's decently physical with jamming receivers at the line of scrimmage, and despite major concerns about his 4.68 40 time that's listed on Rivals, his anticipation helps him in coverage. My biggest reservation about playing him at safety is that he doesn't seem to be a very good tackler. He has decent size at 6' and 180 pounds, but on his highlight films - which are supposed to be his best plays, naturally - his "highlight" tackles are of him diving at the feet of ballcarriers. Even when he has the opportunity for a solid tackle, he goes low. You can see in the above picture that Christian has gone down to his knees and tried (albeit successfully) to tackle the runner.
Christian does have excellent hips, and he also seems to maintain good awareness of what's going on in the backfield. Some corners are too concerned with what their receiver is doing, and some are too concerned with what the quarterback is doing. He looks like he can process both at the same time, which is important for a good cornerback.
I don't really know what Michigan cornerbacks from recent memory he plays like. When you watch his film, he almost seems to be toying with opposing receivers and quarterbacks. He never seems to be running hard, but he makes the play. As I said, he's not a very physical tackler, and a lot of Michigan corners in recent years have been solid tacklers. As far as finding a cover corner, Christian is going to be okay. But there will be moments where you tear your hair out because he misses tackles in the running game.