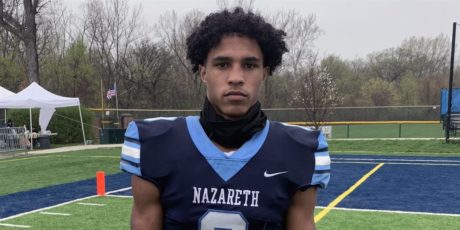 Morris is a 6'0", 165 lb. prospect. He was a teammate of Michigan quarterback J.J. McCarthy up through the 2019 season (McCarthy transferred to IMG Academy for the 2020 season).

Morris was long considered a Michigan lean, with a clear boost from McCarthy. Notre Dame was also a strong contender, and he still plans to take an official visit to South Bend once visits open up again in June. But ultimately, the pull to Ann Arbor was too strong.

Morris is a slightly built receiver who looks like a slot guy. When he's lined up on defense, I'm impressed by his ability to change direction and come out of his breaks. For whatever reason, he does not look as shifty when he has the ball in his hands. However, he does have good quickness and sneaky acceleration. He has the ability to be a good route runner, and he covers up the ball in traffic.

My mantra over the past few years has been this: _______ looks like a good receiver who will not be a dynamic part of Michigan's offense under Jim Harbaugh and Josh Gattis. He looks like a Ronnie Bell-type receiver, a guy who can get open but won't take the top off a defense. And Morris does not have quite the same ability to run after the catch

Unfortunately, Morris tore his ACL and injured his meniscus recently, so he may have to miss his senior season. He is committed to play in the All-American Bowl, too.

Michigan now has seven commitments in the class of 2022, including three offensive skill players: Morris, WR Tay'shawn Trent, and TE Marlin Klein. Technically, he would be the first graduate of Nazareth Academy to play at Michigan, although McCarthy was there for three years before finally finishing out at IMG in December.

TTB Rating: I will not be giving out TTB Ratings yet.