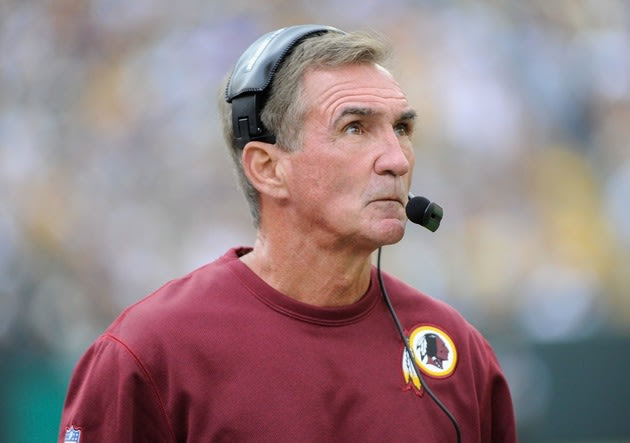 Mike Shanahan
Age: 62
Current position: None
Head coaching experience: 8-12 at Los Angeles Raiders (1988-1989), 138-86 at Denver Broncos (1995-2008), 24-40 at Washington Redskins (2010-2013), 170-138 overall
History: Shanahan grew up in Illinois and played quarterback at Eastern Illinois before his career was ended by a ruptured kidney suffered on the practice field. He worked at various colleges (include Oklahoma, Minnesota, and Florida) as an assistant coach before becoming the offensive coordinator for the Denver Broncos in the mid-1980's. That was followed by his stints as head coach, interrupted by an offensive coordinator job for the San Francisco 49ers in the early 1990's. He famously won two Super Bowls with quarterback John Elway in Denver, but he was fired in 2008 after three mediocre seasons. His stint with the Redskins was marred by the controversy surrounding Robert Griffin III's knee injury, and he was fired by owner Dan Snyder at the end of the 2013 season.
My thoughts: Shanahan seems like a mediocre coach; he is good when he has good players, and he is bad when he has bad players. The one caveat - and the most impressive thing about him, in my eyes - is that he has taken some unheralded offensive linemen and running backs and made them very effective in the running game. Considering the negative publicity surrounding him following the RGIII fiasco, I doubt he would be a huge hit on the recruiting trail. The best thing going for him would be that he coached Elway to a Super Bowl fifteen years ago, right around the time when current high schoolers were in diapers. Shanahan seems like a guy who might be able to manage 8-4 or 9-3 seasons, but wouldn't be much of a threat to make Michigan a national title contender.