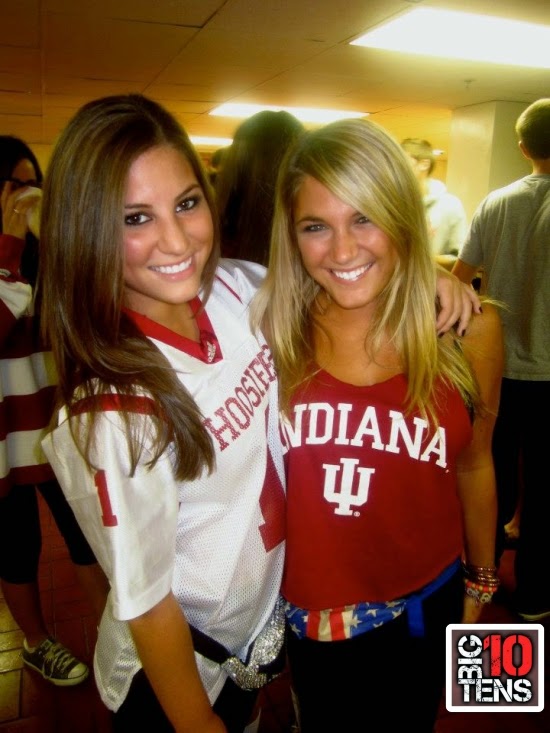 Rush Offense vs. Indiana Rush Defense
Michigan is #79 in rushing this season, but not for a lack of trying. They're #56 in rushing average (4.45 yards/carry) and #90 in rushing attempts (272 total). Not exactly what you would expect from a Michigan team. Aside from a fairly productive blip against Penn State, Michigan has not gained more than 83 yards rushing in its last four games, with 64 or fewer yards in the last two. The team's leading rusher is still Derrick Green, who has missed the past two games with a broken collarbone. Sophomore De'Veon Smith has amassed 33 carries in the last three games, but he has just 94 yards to show for it. Redshirt junior backup Justice Hayes has picked up some of the slack with 16 carries over the past two, but he has not been very effective either. Fifth year senior quarterback Devin Gardner is playing on an injured ankle behind a shoddy offensive line with a coach who doesn't like to run him very much, so don't expect much from Gardner on the ground. Indiana, meanwhile, is #74 against the run (169 yards/game) and tied for #78 in giving up 4.46 yards/carry, so they are below average but not terrible. The leading tackler is sophomore linebacker T.J. Simmons (6'0", 230 lbs.) with 43 tackles, while senior cornerback Tim Bennett (5'9", 185 lbs.) and sophomoe safety Antonio Allen (5'10", 205 lbs.) are close behind with 38 and 36, respectively. Nobody truly terrifying exists on the defensive line, but sophomore nose tackle Nate Hoff (6'2", 305 lbs.), senior defensive end Bobby Richardson (6'3", 286 lbs.), and redshirt sophomore backup nose tackle Ralph Green III (6'5", 325 lbs.) are the leaders in tackles for loss. In the last three games, Indiana has allowed 4.1+ yards/carry in each contest, including 330 yards on 6.5 yards/carry against Michigan State in their last outing. Michigan will not approximate those numbers, but I believe they will have a solid day running the ball.
Advantage: Michigan

Hit the jump for the rest of the preview.

Pass Offense vs. Indiana Pass Defense
The Wolverines are #116 in passing offense (170 yards/game), #120 in passer rating, and they've thrown more interceptions than 119 teams. It's an ugly passing offense because the offensive line is bad, the receivers can't get separation, and Gardner looks lost at the quarterback position most of the time. He has completed 61% of his passes for 6 touchdowns and 10 interceptions. His favorite target is junior Devin Funchess (41 catches, 12.8 yards/catch, 4 touchdowns), and his second favorite is redshirt sophomore Amara Darboh (15 yards/catch), who is quite the acrobat but runs routes like he's never been coached. The Wolverines have allowed 18 sacks, which is tied for 80th nationally. Defensively, Indiana is tied for #83 nationally with 14 sacks, and they are led by Richardson with 4 quarterback takedowns. They are #114 against the pass, giving up 283 yards/game, and #88 in passer efficiency defense. They are tied for #89 in interceptions with 5 total, led by freshman linebacker Tegray Scales's (6'0", 216 lbs.) 2 picks. Bennett has 8 pass breakups after notching 20 last season. The Wolverines had a great deal of success last season against this defense when Gardner set a Michigan record with 503 passing yards, but that included 14 catches and 369 yards from the departed Jeremy Gallon. Nobody else has shown that kind of explosiveness. Michigan should still be able to throw the ball, but this season makes no sense.
Advantage: Indiana

Rush Defense vs. Indiana Rush Offense
The Wolverines had a bad week against Michigan State in their last outing, but they're still #16 while giving up 109 yards/game. They allow just 3.06 yards/carry, which is #12. Michigan's leading tackler is Jake Ryan with 68, and fellow linebacker Joe Bolden has 63. Ryan has 10 tackles for loss, while senior defensive end Frank Clark has 9.5. Michigan got overpowered last week by a physical offensive line and a power running back, but this will be a different challenge with a more athletic offensive line and a speedier back. Indiana's premier player is junior running back Tevin Coleman (6'1", 210 lbs.), who is the nation's top runner (170 yards/game) and averages 8.8 yards/carry. Coleman is a slasher who can take it to the house on any given play, and he runs with a little bit of power, too. Senior backup D'Angelo Roberts (5'10", 207 lbs.) averages a healthy 5.0 yards/carry and has 5 touchdowns on 83 carries. Fifth year senior center Collin Rahrig (6'2", 285 lbs.) and junior left tackle Jason Spriggs (6'7", 300 lbs.) were both All-Big Ten honorable mention last season, but Spriggs was carted off the field in Indiana's last game with an apparent neck injury. Offensive line coach Greg Frey was Michigan's line coach for three years, and I was impressed with his player development; this will be a solid group, but they'll be hurting a little bit if Spriggs does not return. Coleman averaged 7 yards/carry against Missouri, 15 yards/carry against Iowa, and 9 yards/carry against Michigan State. If Michigan shuts down the Hoosiers on the ground, it would be a great feat.
Advantage: Indiana

Pass Defense vs. Indiana Pass Offense
Michigan is #41 against the pass (210 yards/game), which is no small feat considering some early struggles and the offense's inability to keep the defense off the field. They're #79 in passer efficiency rating defense and tied for #115 in interceptions with just 3, including 2 by sophomore Jourdan Lewis; he also leads the team with 4 pass breakups, which is not a significant number. The corners and linebackers are talented, but the safeties often appear clueless. Michigan is #38 in sacks with 19, led by energetic but limited senior defensive end Brennen Beyer with 4. The linebackers don't blitz as often as perhaps they should, so that leaves the pass rush up to the defensive linemen, who have 15 of the 19 sacks. The Hoosiers are #114 in passing (170 yards/game) and #108 in passer efficiency rating. Those numbers might get worse, too. Starting quarterback Nate Sudfeld hurt his shoulder, backup Chris Covington tore his ACL, and the job will go to true freshman Zander Diamont (6'1", 175 lbs.), whom the Hoosiers were hoping to redshirt. In his only action this season, he went 5/15 for 11 yards, plus 10 carries for -12 yards, against Michigan State. If Indiana has a chance to win this game, it's with the running game. The receivers are led by slot guy Shane Wynn (5'7", 167 lbs.), a speedy kid averaging 15.7 yards/catch. Senior Nick Stoner (6'1", 190 lbs.) and freshman J-Shun Harris (5'8", 180 lbs.) are the other starters, but both are averaging fewer than 10 yards/catch.
Advantage: Michigan