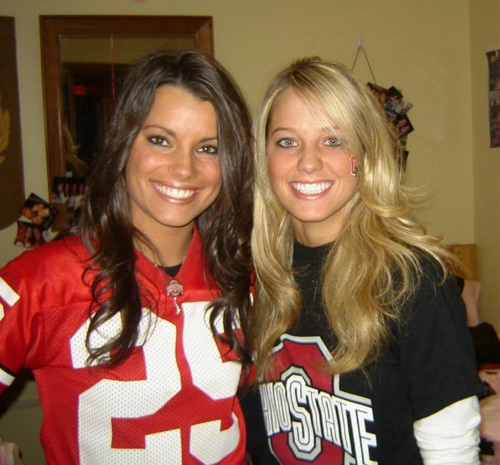 Rush Offense vs. Ohio State Rush Defense
Michigan is #63 in rushing offense (167 yards/game), and they are tied for #43 nationally with 4.74 yards/carry altogether. Quarterback Devin Gardner looked healthier than he has in weeks when he ran for 82 yards against Maryland, and Drake Johnson had 94 yards on just 14 carries. One thing that has contributed to Michigan's improvement since last year is the health and consistency of the offensive line, a unit that missed Graham Glasgow for the season opener and was dealing with some health issues for Kyle Kalis early in the year. Otherwise, the group has stayed intact enough that last year's starter at left guard, Erik Magnuson, has donned the #81 jersey and moved to tight end for the time being. Head coach Brady Hoke claimed that the Northwestern game was the line's best game of the season, and Michigan ran for twice as many yards against Maryland as they did against the Wildcats. Meanwhile, Ohio State is #41 against the run (148 yards/game allowed) while giving up 4.12 yards/carry, which is 59th. The high-scoring Buckeyes have faced just the 38th-fewest carries on the year. The leading tackler is junior strongside linebacker Joshua Perry (6'4", 250 lbs.), who is seventh in the Big Ten with 9 tackles/game (99 total). The next two guys on the list are the safeties, sophomore Vonn Bell (5'11", 200 lbs.) and redshirt sophomore Tyvis Powell (6'3", 205 lbs.). The Buckeyes are tied for 12th nationally with 81 tackles for loss, led by 18 from sophomore defensive end Joey Bosa (6'5", 285 lbs.), 11.5 from redshirt freshman weakside 'backer Darron Lee (6'2", 225 lbs.), and 8.5 from Perry. While Michigan's offensive line has improved, this is a formidable front coached by Penn State transplant Larry Johnson, one of the best defensive line coaches in the nation.
Advantage: Ohio State

Hit the jump for the rest of the preview.


Pass Offense vs. Ohio State Pass Defense
Michigan is #115 nationally with 163 yards/game through the air, and their passer efficiency rating is #119. Quarterback Devin Gardner has thrown just 8 touchdowns while throwing 14 interceptions this season, including 0 scores and 3 picks in the past two games. When these two teams meet, it will have been 28 days since Gardner's last scoring pass. Leading receiver Devin Funchess has been lackadaisical for the last couple months, and his 11.4 yards/catch is unimpressive; he drops too many passes, he doesn't break tackles, and the offense rarely takes advantage of the fact that he is 6'5" and 230 lbs. Redshirt sophomore Amara Darboh has been the more reliable target. Over the last five games, Darboh (21 catches, 284 yards, 1 touchdown in that span) has outperformed Funchess (26 catches, 233 yards, 1 score). Darboh has his own weaknesses in speed and route running, but he catches the ball if Gardner can get it there. The Wolverines are tied for #55 in giving up 21 sacks this season, an acceptable number after last year's dismal performance, but the line will be tested against the Buckeyes. Ohio State is tied for 17th with 32 sacks, led by Bosa (11.5). Linebackers Lee and Perry have 4.5 and 3.0 sacks, respectively, while defensive tackles Michael Bennett (6'2", 288 lbs.) and Adolphus Washington (6'4", 288 lbs.) have 5.5 between them. On the back end, Ohio State gives up 183 yards/game through the air, which is #15 nationally, and their passer efficiency rating allowed is 8th-best. They also have 17 interceptions, which is #6 in the country. Bell, Powell, and senior cornerback Doran Grant (5'11", 193 lbs.) each have 3 picks; Lee and redshirt freshman corner Eli Apple (6'1", 195 lbs.) have 2 each. This is a tough matchup because of Ohio State's decent size and speed in the secondary; they aren't the best tacklers, but none of Michigan's receivers can create after the catch, so that doesn't play into the Wolverines' strengths. This is a tough matchup for Michigan.
Advantage: Ohio State

Rush Defense vs. Ohio State Rush Offense
Michigan is #9 defensively by giving up 107 yards/game on the ground, and the 2.94 yards/carry they give up is #7. Middle linebacker Jake Ryan makes 9.45 tackles/game (104 total) to rank #2 in the conference, while weakside linebacker is second on the team with 93 stops. Arguably Michigan's best defensive tackle, Willie Henry has played sparingly the past few weeks after a hand injury. Nose tackle Ryan Glasgow has done well. Michigan missed defensive end Frank Clark against Maryland after he was kicked off the team. Junior Mario Ojemudia (5 tackles for loss, 1 tackle for loss) was decent in his stead, but he's lighter and less seasoned. Ohio State's spread formations may make it difficult for the Wolverines to keep junior linebacker James Ross III on the field, but he's a better bet to stop Ohio State's effective running game than nickel corner Blake Countess. The Buckeyes are #14 nationally with 260 yards/game on the ground and #12 with a 5.6 yards/carry average. A mostly new set of offensive linemen and the loss of Carlos Hyde have seen that yards/carry figure drop 1.2 yards from last year's nation-leading 6.8 clip, but that's still some good production. Sophomore lead back Ezekiel Elliott (6'0", 225 lbs.) has already eclipsed the 1,000 yard mark and averages 5.9 yards/carry, while redshirt freshman quarterback J.T. Barrett (6'1", 225 lbs.) averages 5.4 and will probably get to 1,000 yards by the end of bowl season. Freshman Curtis Samuel (5'11", 190 lbs.) is Elliott's backup and averages 6.9 yards/carry on 51 attempts. The Buckeyes have four new starters on the offensive line this season, and a couple guys on the two-deep used to be defensive linemen. The only returning starter is left tackle Taylor Decker (6'7", 315 lbs.), a senior who bumped from right tackle to the left side. On the interior, Ohio State plays a junior, a redshirt sophomore, and a redshirt freshman. Despite a pretty good run defense for Michigan, the presence of Barrett will make this especially difficult.
Advantage: Ohio State

Pass Defense vs. Ohio State Pass Offense
Michigan is 24th in the country as they give up 195 yards/game through the air, but the passer efficiency rating against them is in the middle of the pack at #64. The Wolverines are #29 with 29 sacks this season, led by senior defensive end Brennen Beyer with 5.5. Interestingly, Michigan's top six sack totals are from defensive linemen, and 24 of the sacks have come from the line; starting inside linebackers Jake Ryan and Joe Bolden have 2 sacks each, but they don't blitz often. Defensive coordinator Greg Mattison counts on his line to get there on organic pass rushes and occasional loop stunts. Meanwhile, in the secondary, Michigan is #117 - tied with South Florida and Old Dominion - with 5 interceptions. Those 5 include 2 from cornerback Jourdan Lewis, 2 from defensive tackles, and 1 from linebacker Jake Ryan. Even worse, Michigan is tied for #120 - with Wyoming and Old Dominion - with 30 passes defensed. The fact is that the Wolverines don't have tight coverage and generally struggle to make plays on the ball, with Lewis being the most consistent player in those aspects. Meanwhile, Ohio State is #49 with 252 yards/game passing, but they're #3 in passer efficiency. Barrett completes nearly 65% of his passes and has thrown for 33 touchdowns (plus 10 interceptions) in his first season of college football. Senior Devin Smith (6'1", 197 lbs.) and redshirt sophomore Michael Thomas (6'3", 203 lbs.) lead the team with 8 touchdowns apiece and just over 600 yards apiece. Redshirt freshman receiver Jalin Marshall (5'11", 205 lbs.) broke out with 3 touchdown catches last week against Indiana and has 4 scores in the last two weeks. The top four wideouts each average more than 14 yards/catch, and tight ends Jeff Heuerman (6'5", 255 lbs.) and Nick Vannett (6'6", 260 lbs.) have 29 catches for 354 yards and 5 touchdowns among them. Pick your poison. The offensive line has allowed 23 sacks, which is tied for #69 nationally. Unless Barrett chokes in his first big rivalry game, this could be ugly for Michigan.
Advantage: Ohio State