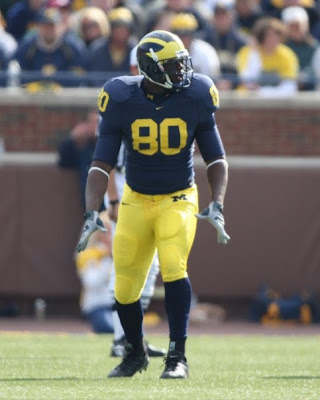 Webb burned his redshirt in 2007 by playing sparingly and now finds himself a true junior, although he's never caught a pass at Michigan. Practice viewers rave about his athleticism, but the word is that he's had trouble catching the ball. I haven't heard that criticism as much recently, so perhaps he has improved in that area.

A contingent of Michigan coaches has visited both Missouri and Oklahoma over the past two offseasons to do some research on how those two schools have used their tight ends (Chase Coffman and Jermaine Greshman, respectively) so effectively in recent years. Webb figures to be a beneficiary of some of those lessons, although he'll most likely be the second TE on the field. Expect to see Webb in the slot or even perhaps in the backfield on occasion, but don't expect a ton of production. Not only does Webb lack a track record of catching the football, but tight ends in Rodriguez's offense haven't fared well in recent years, either. I think you'll see a slight uptick in the production from the tight ends, but not much - if Webb catches more than five passes all year, I'll be surprised.
Posted by Thunder at 8:53 PM