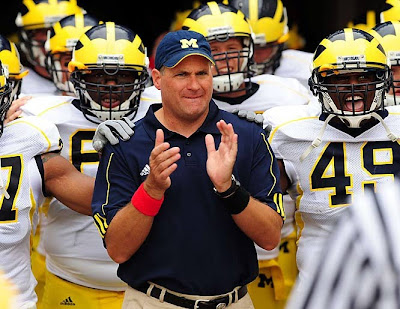 Detroit Free Press writer Michael Rosenberg has released allegations that Rich Rodriguez and his assistant coaches are overworking their players.
Rosenberg's article states that players were required to work more than the NCAA-regulated 20 hours per week during the season and coaches and quality-control staffers watched 7-on-7s that are supposed to be player-run, among other things. The writer's sources are supposedly current and former Michigan players, along with parents of others.
As could be expected, these allegations are causing an uproar in the blogosphere as well as in the college football world. Michigan's football program has never been found guilty of major violations. If Lloyd Carr were still the coach, he and the program might be insulated a bit by the respect he had in the coaching world. But Rodriguez has already been inundated by attacks on his character for at least the last couple years, including the lawsuit by WVU, parting shots by Kurt Wermers and Justin Boren, and the questionable character of Justin Feagin.
The article includes quotes from incoming freshmen Je'Ron Stokes and Brandin Hawthorne, apparently recorded at Michigan's Media Day. They mention having football-related work to do all day during the summer. Their comments can seem pretty damning on the surface, but those quotes aren't evidence of NCAA violations. The quotes Rosenberg uses really make no mention that the coaches were mandating the workouts. If any player wants to work out and do 7-on-7s for 18 hours a day, he's allowed.
But Rosenberg seemingly preyed on two incoming freshmen who likely had very little knowledge of the NCAA rules. It's interesting that the two Michigan sources who didn't request anonymity were 18-year-old kids who haven't even finished their first summer practices. At best, Rosenberg's journalistic efforts seem like poor journalism; at worst, they're downright disingenuous and good reason for Rosenberg to be blackballed by Michigan sources from this point forward.
That being said, it's not unbelievable that some violations occurred. During the season, coaches are allowed 20 hours of mandatory football work per week. Three hours of that come on Saturday, meaning there are 17 hours to spread amongst five other days (the players had Mondays off last year). That's an average of 3.4 hours per day on those five days. Between practices and workouts (film study and visits to the training room don't count), that's not very much time per day. As a frame of reference, high school teams usually practice 2.5 to 3 hours per day in addition to 7 hours of school; college football players aren't in class for nearly that amount of time per day.
One of the biggest variables in this story revolves around the definition of "mandatory." If coaches are present at "voluntary" workouts, they are by definition mandatory. Nobody outside the program knows whether coaches were present at voluntary 7-on-7s, so it's impossible and absurd for Michigan fans to dismiss this story out of hand. That being said, in the modern age of college football, very few workouts are truly "voluntary." Kids need to be in great shape and have their techniques fine-tuned to be competitive. One motto that's repeated in the story is "Workouts aren't mandatory, but neither is playing time." If Player A works extremely hard during voluntary workouts and learns all he can, when the season comes around, he's going to get on the field ahead of Player B, who might only do the required minimum. If coaches were, in fact, present at 7-on-7s or voluntary workouts, that's practically a guarantee that the practices went over the allotted 20-hour weekly limits.
If the NCAA investigates Rosenberg's allegations, sanctions could include a loss of practice time or scholarship restrictions. Either could doom Michigan's chances of regaining its stature as a powerhouse program in major college football in the near future. If Rodriguez's program does incur sanctions such as these, this could be the death knell for Rodriguez as Michigan's coach. Some fans and boosters have already been wary of Rodriguez, and major violations would probably sway another large chunk of fans and boosters.
And you can include me in that group. Whether Rodriguez and his staff are guilty of these allegations, I don't know. If they aren't - and I don't trust Rosenberg as far as I could throw him - then the writer should be blackballed or perhaps even fired. If they are guilty, heads should roll. I don't blame Rodriguez for last year's 3-9 record, but you can't field the worst Michigan team in forty years, commit major program violations, and keep your job.
Posted by Thunder at 11:59 AM