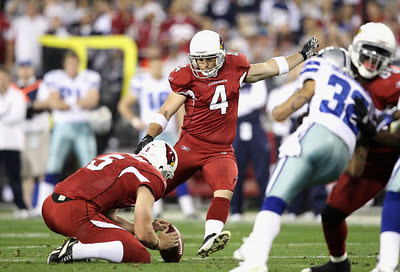 Kicker Jay Feely sent both of his field goal attempts through the uprights on Sunday, converting from 48 and 23 yards out, which allowed his Arizona Cardinals to defeat the Dallas Cowboys in overtime by a score of 19-13. Holding a record of 5-7, it marks the first time this year that the Cardinals - Feely's seventh NFL team - have defeated a squad with a winning record. After struggling early in the season, Feely has since converted on his last five field goal attempts and is now 11-for-16 on the year. Interestingly, this is the second consecutive match-up between Arizona and Dallas that Feely has decided the game: last year, he sent a 48-yarder through the uprights to give the Cardinals the lead with only 5 seconds remaining on Christmas day.

Honorable Mention: Tom Brady put on another impressive statistical performance, throwing for 289 yards and two touchdowns with zero picks in a 31-24 win over the 0-12 Colts on Sunday. However, the game was not nearly as close as the final score indicates, so despite nice stats, it's hard to say that Brady was the difference-maker, thus relegating him to Honorable Mention this week behind Feely.
Posted by TTB Andrew at 1:00 PM